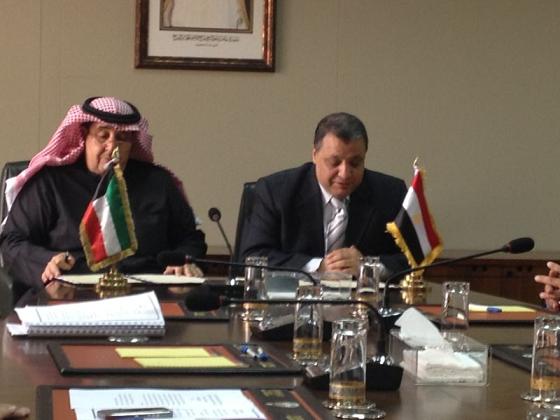 27-December-2012, Kuwait Foreign Investment Bureau (KFIB) participated, as a member of the Ad-Hoc Team on drafting commercial and industrial cooperation protocol between the State of Kuwait and the Republic of Egypt,  in the  first meeting  of the Team held in Kuwait during the period December 18 – 19, 2012. The Kuwaiti delegation was headed by the Undersecretary of the Ministry of Commerce and Industry, and the Egyptian delegation was led by the First Undersecretary of the Ministry of Industry and Foreign Trade. Both sides confirmed the importance of formulating new approaches and strategies to enhance the commercial and industrial cooperation, and generate viable Investment opportunities in high-end projects.  Of particular importance was the elaborate discussion on possible means to attract and encourage foreign direct investment (FDI) between both countries. In this regard,  several approaches were tackled, including promoting available investment opportunities, developing a practical  mechanism to  encourage smooth flow of cross-border investments, making information available to investors, and exchanging experience in the management of Special Economic Zones (SEZs).On the side of the meeting, the Minister of Commerce and Industry welcomed the Ad-Hoc Team; and it was agreed that the draft protocol will be initialed in the next meeting to be held in Cairo during the first quarter of 2013.