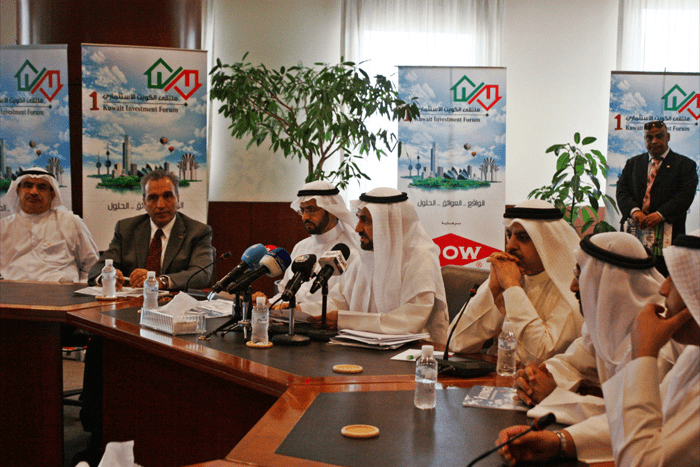 10-Apr-2012, Kuwait Foreign Investment Bureau (KFIB) participated in the first Kuwait Investment Forum, which was held during the period from 7 to April 9, 2012, in the Kuwait Chamber of Commerce and Industry. The Forum is organized by the Media Forum under the theme “Investing in Kuwait … Facts, Obstacles, & Solutions.”

It has provided an interactive platform assembling various concerned parties amongst policy makers and investors in the Kuwaiti economy. It was attended by dignitaries and officials from the government, the National Assembly, the private sector, representatives of local as well as regional organizations and financial institutions, academics, economic experts, and entrepreneurs. The forum focused on analyzing the investment climate of Kuwait, identifying challenges and obstacles that hinder private investment both domestic and foreign into various sectors of the economy, especially the non-oil sectors. It also focused on promoting private sector participation in Kuwait’s development plan. The Forum’s sessions covered several topics including “the investment environment in Kuwait … hope and reality”, “investment in the oil and petrochemical industries”, “Recovering from the Financial Crisis…The Government Vision”, “Kuwait Development Plan Projects…Investment Opportunities for the Kuwaiti Companies”.

Kuwait Foreign Investment Bureau’s (KFIB) Chief stressed the importance and timeliness of holding this Forum, in light of current regional and international challenges. He pointed out that KIFB was established with the mandate to support the national efforts of diversifying the economic base of the country. KFIB Chief explained that the Bureau, as a division within the Ministry of Commerce & Industry, is subject to bureaucratic hurdles, a fact that sometimes masks the size and nature of its achievements. He further portrayed the ongoing efforts to promote investments into the State of Kuwait, using various modern means towards that end, with the fact that foreign investors have expressed their tendency to favor Kuwait as their investment destination for several reasons amongst them the existence of a conducive legislative and judicial environment, quality of its national human capital, and the quality of its infrastructure. Furthermore, he pointed out that the Bureau is working with dedication to make it easier for investors to enter and operate their business in the state of Kuwait, including the preparing of an Investor Guide that lists potential investment opportunities available in Kuwait. The bureau is also currently preparing for study to develop economic zones, as well as drafting a new and modern foreign investment law which aims to address any shortcomings of the current law.

The Minister of Commerce & Industry has addressed the Forum’s audience announcing the active steps being undertaken towards streamlining the bureaucratic procedures, which constitutes a basic hurdle, supporting the ratification of new companies law as well as the anti-trust law. More steps are also undertaken to implement the Ministry’s strategy to enhance the role of the private sector in the national economy, coordinate with other concerned entities to strengthen role of the National Fund for Development, enhance FDI inflows into Kuwait to play an integral role in economic and social development by approving the new FDI Draft law that will establish an independent Investment Promotion Agency (IPA).