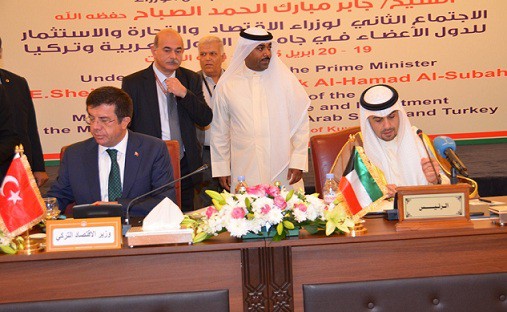 25 April, 2015: Kuwait Direct Investment Promotion Authority (KDIPA) participated in the second meeting of the Ministers of Economy, Trade, and Investment in the League of Arab States and Turkey held in Kuwait during the period April 19-20, 2015 under the patronage of H. E. the Prime Minister of Kuwait. The meeting tackled issues of enhancing investment and trade between Arab countries and Turkey to achieve well being and economic growth, through viable investment opportunities, facing challenges, and exchanging expertise. Ms. Reem Al Shaya, Head of International Agreements Section, represented KDIPA, whereby she engaged in discussions on increasing Arab Turkish investments in various sectors, improving their respective investment climate, and eliminating potential obstacles facing investors. It was proposed to establish a joint Arab-Turkish investment committee, and continue with the deliberations on establishing a free trade zone between both parties. It was decided at the conclusion to uphold the third meeting in Turkey in 2017. The first meeting was held in Mersin, Turkey in 2013, in the aftermath of the Arab Turkish Forum held in Istanbul in 2012.