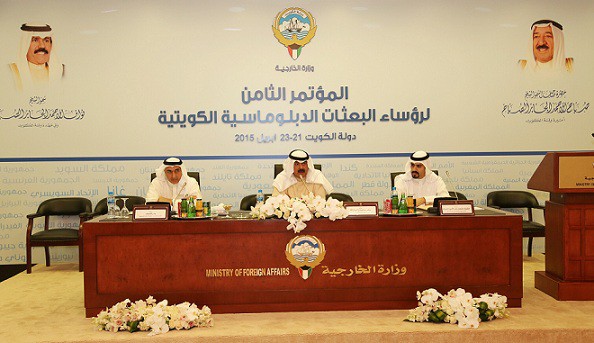 26 April, 2015: The Director General of Kuwait Direct Investment Promotion Authority (KDIPA) Sheikh Dr. Meshaal Jaber Al Ahmad Al Sabah presented a lecture to the 8th conference of Kuwait’s diplomatic missions abroad, held during the period April 21-23, 2015 in Kuwait. The lecture was conducted through a power point presentation on the topic “Horizons of Inward Investment”, whereas the Executive Director of Kuwait Investment Authority (KIA) provided a lecture on “Horizons of Investment Abroad” both on Wednesday April 22, 2015, morning session. Dr. Meshaal reviewed Kuwait unique proposition and attributes that makes it an attractive investment hub, the strength of its current macroeconomic performance, as well as its position in key international indices. He also tackled the host of economic laws that were approved and were conducive to improve the overall legal and regulatory environment. He explained the milestones that KDIPA had witnessed, and the types of incentives and guarantees it offers in accordance with preset criteria that aspire to attain the goal of economic diversification. DR. Meshaal concluded by emphasizing the integral role of the diplomatic missions and the importance of having a good synergy with KDIPA to achieve the country’s goals. The heads of diplomatic missions welcomed such a cooperation and role and came forward with several comments and inquiries hat were duly addressed. Dr. Meshaal was accompanied by Mr. Bader Al Gadi, Head of Investment Promotion Section, and MS. Reem Al Shaya, Head of International Agreements Section. The seventh conference was held in Kuwait on March 2013.