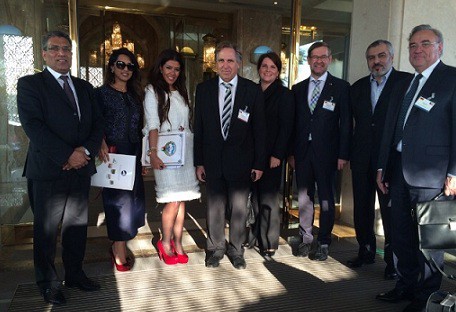 December 24, 2014: Kuwait Direct Investment Promotion Authority (KDIPA) participated in the 4th session of the Kuwait-German Joint Committee held during the period December 8-10, 2014, in Kuwait.  The Kuwaiti delegation was headed by the Undersecretary of the Ministry of Commerce & Industry and the German delegation was headed by the Deputy Minister of State for Economic Affairs. The meeting addressed further venues for enhancing existent economic and commercial cooperation in various fields, particularly in infrastructure, aviation, academic training, and medicine, and tackled prospects for future partnerships through the effective participation of the German companies in the Development Plan projects in the areas of health, education, housing, and technology. This envisioned cooperation, which reflects the strength and the length of the current relations between the two countries,  shall consider supporting  the country’s efforts for the diversification of its economic base, mainly through  strengthening the contribution of its industrial sector. Germany is considered the fourth largest trading partner with Kuwait as their total trade reached around 1.7 billion Euro in 2013, and the Kuwaiti investments in Germany are estimated to exceed 15 billion Euros. On another hand, KDIPA’s legal researcher Ms. Reem Al Shaya, provided a presentation explaining the main attributes of the Law No. 116 of 2013 regarding the Promotion of Direct Investment in the State of Kuwait, and responded to the inquires raised, reiterating KDIPA’s concern to attract and encourage direct investments in Kuwait by both local and foreign investors. The German delegation requested more clarifications and data on FDI in Kuwait. KDIPA proposed a draft cooperation protocol to encourage direct investment between the two countries. At the conclusion, it was agreed to convene the upcoming meeting in Berlin in two years time.

KDIPAparticipates in the 10th session of the Kuwaiti-Egyptian Joint Committee