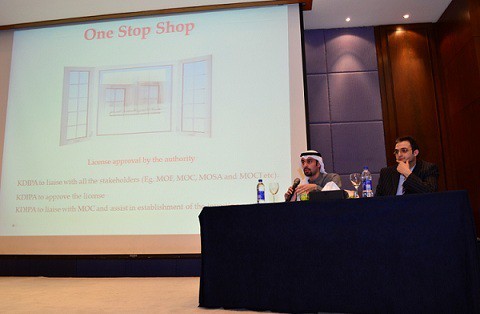 10 February, 2015: Kuwait Direct Investment Promotion Authority (KDIPA) participated in EY Kuwait Tax Seminar Series held on February 9, 2015 in Kuwait. The event was attended by around 100 personalities from Kuwaiti business families, and executives of existing multinational corporations in Kuwait or those planning to do so. During this seminar, EY shed light on recent tax developments affecting Kuwait based enterprises, and presented its vision on issues relating to recent tax developments, including Zakat, the National Labor Support Tax (NLST), the 5% retention rules, and Base Erosion& Profit Shifting (BEPS) of transfer pricing arising from mismatch arrangements affecting countries hosting investments from multinational companies. KDIPA’s panelists in the seminar, both Sheikh Abdullah Al Sabah, Head of Licensing & Investment Registry, and Mr. Amre Wajeeh, Legal Consultant, provided an overview on the Executive Regulations of Law No. 116 of 2013 regarding the Promotion of Direct Investment in the State of Kuwait, and the followed application procedures. They also responded to incoming questions from the audience on several issues including the One-Stop-Shop, the Negative List covering economic activities that are excluded from the provisions of Law 116 of 2013 in accordance with the recently issued Council of Ministers Decision, KDIPA’s Economic Zones, and their insight on principal-agent issue.