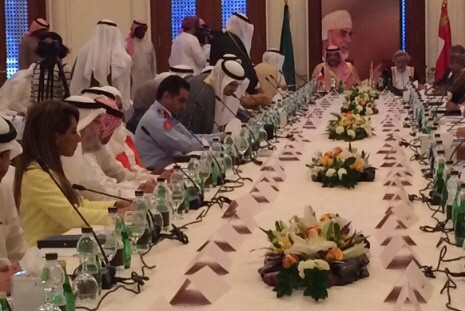 23 February, 2015: Kuwait Direct Investment Promotion Authority (KDIPA) participated in the seventh session of the Joint Kuwaiti-Omani Committee held in Muscat, Sultanate of Oman on February 18-19, 2015. The Kuwaiti delegation was headed by H.E. Deputy Prime Minister & Minister of Foreign Affairs, and the Omani delegation was headed by H.E. the Minister Responsible for Foreign Affairs. The meeting tackled means to foster bilateral cooperation between the two countries in economic, commercial, investment and legal fields. Several agreements and memorandums of cooperation were signed including in various areas including those relating to civil service, administrative development and training. KDIPA was represented by Ms. Reem Al Shaya, Head of International Organizations Section, who met with the Omani Public Authority for Investment Promotion & Export Development (Ithraa), whereby both parties explained their objectives and scope of work, exchanged governing legislations, and agreed to consider signing a memorandum of cooperation in the area of direct investment. Another meeting was held with Duqm Special Economic Zone Authority (SEZAD), in which a presentation was delivered highlighting the rising significance of this zone, and they expressed their desire to pursue cooperation with KDIPA in areas relating to direct investment, exchange of information, and country visits. On her part, KDIPA’s representative explained the main provisions of Law No. 116 of 2013, the incentives and exemptions granted under this law to foreign investors, as well as the recent Council of Ministers Decision No. 75 of 2015 regarding the List of Excluded Direct Investments from the Provisions of Law No. 116 of 2013.The sixth session of the Joint Kuwaiti-Omani Committee was held in Kuwait in April 2013.