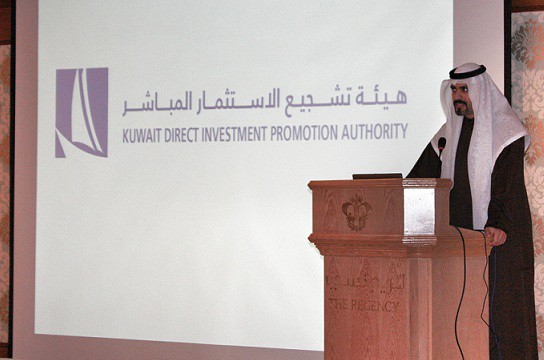 Kuwait Direct Investment Promotion Authority (KDIPA) held an Open Meeting with the Kuwait contributors of the questionnaires for the Doing Business Report 2015 (DB2015) issued annually by the World Bank Group (WBG), on January 7, 2015 at Regency Hotel, Kuwait. The meeting was attended by members of the Permanent Committee for Streamlining Business in Kuwait, established by a Prime Minister Resolution No. 1551/2013, namely Eng. Jasem Al Lingawi, assistant Undersecretary at the Ministry of Electricity & Water, and Mrs. Adawiyah Al Failakawi, Manager of Commercial Licensing Department on behalf of Mr. Dawoud Al Sabej, assistant Undersecretary at the Ministry of Commerce & Industry, and around 35 personalities representation Thukhur Initiative, Chamber of Commerce & Industry, WBG Kuwait office, legal firms, consulting, auditing, and engineering firms, some experts, as well as KDIPA staff. Sheikh Dr. Meshaal Jaber Al Ahmad Al Sabah, KDIPA Director General, and Head of the Permanent Committee for Streamlining Business in Kuwait, welcomed the attendees expressing the importance of such meetings as a venue for getting to closely be aware of the perceptions of the private sector on doing business in Kuwait and identifying issues that  need to be addressed, announcing that this is the first of  a series of such Public- Private dialogue to continue the reform agenda for enhancing Kuwait investment climate. Mrs. Reem Al Banwa, manager of the Planning & Competitiveness Department at KDIPA, and Rappatoeur of the Permanent Committee, presented a timeline for the establishment and activities of the Committee and its role in preparing official report and providing needed documents for the DB2015 report and the roadmap for the upcoming DBN2016. From her side, Mrs. Mona Salim Bseiso, Economic Consultant at KDIPA, member of the Permanent Committee, provided a detailed presentation covering technical and methodological issues relating to Kuwait position in DB2015,  and relevant issues arising from the remarks received by DB team. Dr. Mohamed Al Zohair, Executive Chairman of the National Fund for Small & Medium Enterprise Development provided a brief overview of the Fund’s upcoming plans and service delivery model to support the Kuwaiti entrepreneurs, especially that its executive regulations were passed. The floor was then open for questions and remarks, which were duly noted and responded to. The meeting was concluded with KDIPA Director General thanking attendees and hoping for continued cooperation.