KDIPA participates in a “Scoping Workshop” 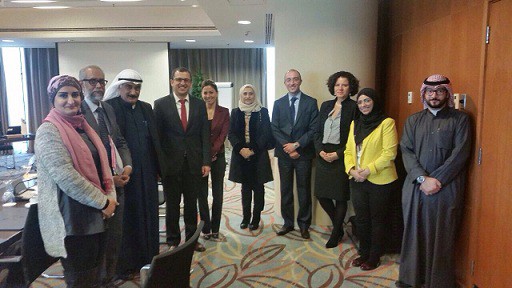 January 15, 2015: Kuwait Direct Investment Promotion Authority (KDIPA) participated in a “Scoping Workshop” that was organized by the World Bank Group (WBG) upon its request during the period January 11-13, 2015 at the Four Points/Sheraton Hotel in Kuwait. The workshop was also attended by members of the Permanent Committee for Streamlining Business Environment, and Thukhur Initiative. Sheikh Dr. Meshaal Jaber Al Ahmad Al Sabah, KDIPA Director General, and Head of the Permanent Committee for Streamlining Business in Kuwait thanked the WBG for its expedite response to Kuwait’s request to organize such a workshop which will be conducive to support existing efforts for streamlining business environment in Kuwait, especially that it came in the aftermath of the open session held with the local contributors of the DB2015, which is hoped to trigger a continuous Public Private dialogue. Dr. Bassam Ramadan, Country Manager for Kuwait at the World Bank, reiterated their willingness to provide needed technical support to improve overall investment climate in Kuwait. Experts from the Doing Business team at the WBG provided over two days a detailed overview of the ten indicators of the Ease of Doing business Report 2015, introducing the new methodology and the use of distance to frontier (DTF) in ranking, as well as benchmarking Kuwait findings and reviewing main recommendations and relevant global best practices. On the last day various presentations were provided covering venues and examples of technical assistance for streamlining business environment and the need to customize it to reflect the exact requirements and priorities of the recipient country, and ensure national ownership and engagement to achieve success in streamlining efforts.