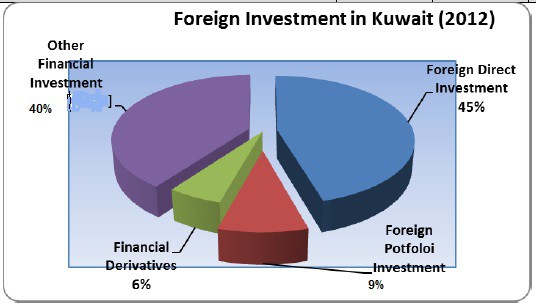 June 17, 2014: Kuwait Direct Investment Promoting Authority (KDIPA) participated in the press conference called upon by the Central Statistical Bureau (CSB) to reveal the results of the first FDI survey for Kuwait held on Tuesday June 17, 2014 at the premises of the Supreme Council for Planning and Development. The overview of the project and the findings were jointly announced by the Assistant Undersecretary for Statistics, the Director General of CSB, and the project technical supervisor from Kuwait University Centre of Excellence. A follow-up committee was established that consisted of representatives from the Ministry of Finance, the Ministry of Commerce and Industry the Central Bank of Kuwait, , the Kuwait Stock Exchange, and KDIPA. The primary purpose of conducting the direct investment survey is to improve the quality of statistics in Kuwait and help the policymakers in developing strategic plans for the country and streamlining and monitoring the business environment. The survey started in November 2013 and continued till completion over a five months period. It was based on the IMF definition (FDI ownership of 10% or more of equity shares) and the coordinated survey for foreign investment enterprises. It covered stocks of direct investment for both inflows and outflows for the end period from 2010 till 2012. The survey data was collected using the electronic form and through e-mail. The survey covered 486 enterprises with a response rate of 57.3%. The results are summarized here as follows: • The total value of foreign investments stock into Kuwait (for sectors covered by the survey with the exception of the government sector) reached KD 6521.8 million at the end of 2012 , with an increase of by 18.4 % compared to its total value in 2011 at KD 5508.5 million. The share of FDI represented around 45.6 % of the total, followed by the other foreign investments covering loans, deposits & facilities (40%), foreign portfolio investment ( 8.8 %), and foreign investments in financial derivatives ( 5.6 %). • FDI stocks in Kuwait reached KD 2972.8 million end of 2012 increasing by 39.5% compared to KD 2130.4 million end of 2011. • The geographic distribution of the source of FDI in Kuwait in 2012 is concentrated in 10 countries with a cumulative share of 98.8%, top of which is Qatar ( 65.6%), Bahrain (7.1%), UAE (5.5%), Saudi Arabia (4.9%), and Lebanon, Oman, Jordan, Jersey Island, USA, and France in smaller shares. • The sectoral distribution of FDI in Kuwaiti in 2012 is primarily in communications (60.9%), investment companies (201.1%), insurance companies (9.7%), followed with less share of banks, investment funds, exchange companies, industrial and service companies. • The total number of employees in FDI companies ( 58 companies) has reached 4462 workers at the end of 2012, compared to 4190 workers at the end of 2011. The number of Kuwaiti employees in those companies has reached 33.2% up from 32.6% of the total in the same period. • The most constraint factors for FDI in Kuwait to be the procedures relating to land sale, lease and mortgage , the procedures with the Ministry of Social Affairs and Labor, followed by obtaining environment certificate. • The most motivating factors for FDI in Kuwait is the low price of fuel, the ease in signing up for membership in the Chamber of Commerce and Industry and the ease of opening a bank account and deposit start-up capital. The total value of Kuwaiti investments abroad was about KD 14,534.9 million at the end of 2012, with an increase by 9.8% compared to KD 13236.3 million end of 2011. The share of direct investment abroad represented around 54.9 % of the total, other investments abroad (29.7%), foreign portfolio ( 13.1%), and financial derivatives ( 2.3 %). Please click here for more details: http://www.csb.gov.kw/Socan_Statistic_EN.aspx?ID=23