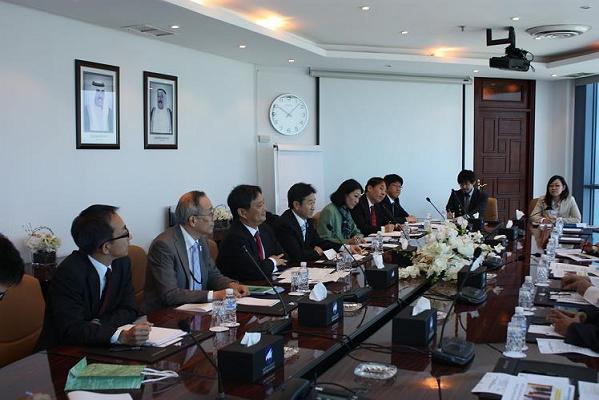 18 –June- 2013, Kuwait Foreign Investment Bureau (KFIB) Chief Dr. Meshaal Jaber Al Ahmad Al Sabah received, with KFIB managers and consultants, a governmental Japanese delegation from the Ministry of Land, Infrastructure, Transport, & Tourism, headed by H.E. Mr. Toshihiro Tsujihara, Ambassador of Japan to the State of Kuwait  at KFIB premises on June 18, 2013. The Japanese delegation explained that their visit to Kuwait intends to present their expertise in the field of spatial planning, and investigate the potential  role the Japanese companies could play in the Development plan projects, given their global experience. In his turn, KFIB Chief  welcomed the delegation and explained the current transitional situation, as highlights of the new FDI Law No. 116/2013 were presented, including the establishment of a public authority for direct investment promotion. The Japanese delegation expressed their appreciation to the expected improvements brought by the new law, especially the establishment of one stop shop to streamline business environment and reduce procedures. They also reiterated the strong and historical relation that Kuwait shares with Japan, transpired in the joint statement released upon HH the Emir of Kuwait visit to Japan in March 2012. They also conveyed gratitude to Kuwait for its support to Japan in the aftermath of the earthquake/ tsunami that hit Japan in 2011. The meeting concluded with a concern raised by the Japanese delegation on a certain barrier that faces Japanese companies when considering business in Kuwait. KFIB Chief promised to follow the matter and to review their proposal for the mutual benefit of both parties.