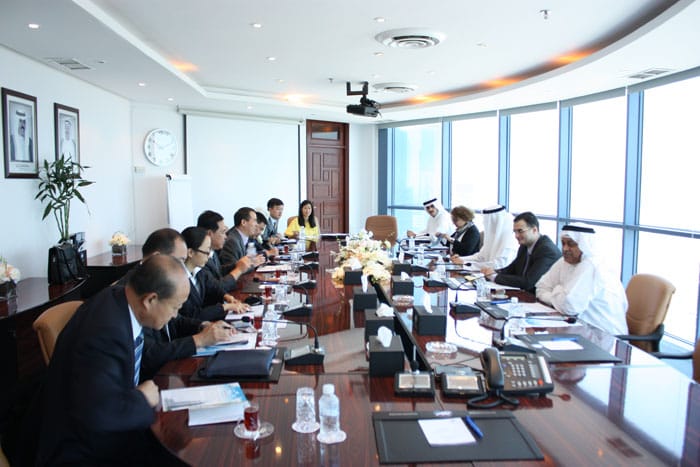 28-ـJun-2012, Kuwait Foreign investment Bureau (KFIB) hosted in its premises on Wednesday, June 27, 2012, a Chinese economic delegation representing the Investment Promotion Bureau of Ningxia Hui Autonomous Region. The delegation was headed by Mr. Wang Jing, Director General, Director of Office. This meeting was part of the delegation’s program during its visit to Kuwait from June 25 to 27, 2012, and aimed at meeting with various Kuwaiti government entities and private sector representatives represented by the Chamber of Commerce & Industry, and leading Kuwaiti companies specialized in the transport, communications, energy, hotels, furniture and food industries.

KFIB Chief started the meeting by welcoming the delegation, and providing an overview of KFIB procedures and services. On its turn, the Chinese delegation presented a number of investment opportunities in the territory of “Ningxia” in the tourism sector and renewable sources of energy, with focus on solar energy generation and related industries. KFIB has indicated that there are currently 13 open sectors for FDI in Kuwait, according to Law No. 8/2001 and related resolutions.

China and Kuwait enjoys significant economic relations in various aspects. The two countries have signed avoidance of double taxation treaty on December 25, 1989, and a bilateral Treaty for encouragement and protection of investment on November 23,1985, entered into force on December 24, 1986