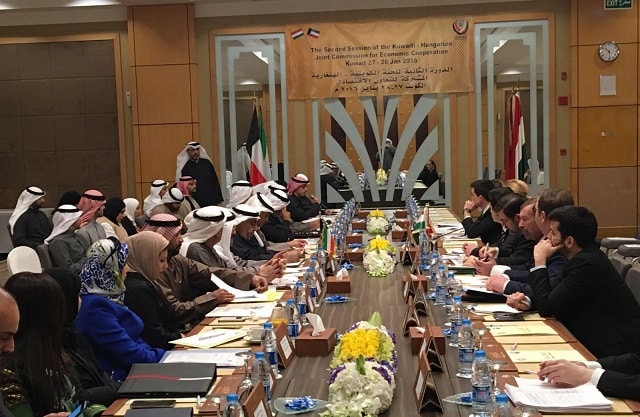 Kuwait Direct Investment Promotion Authority (KDIPA) participated in the Second Session of the Kuwaiti – Hungarian Joint Commission for Economic Cooperation, which took place during 27-28 January, 2016. The Kuwaiti delegation was headed by the Under-Secretary of the Ministry of Finance, Mr. Khalifa Hamada, whereas the Hungarian delegation was headed by the Deputy Minister of Foreign Affairs and Trade, Dr. László Szabó. KDIPA was represented by Ms. Reem Al Shaya, Head of International Agreements Section. The two sides also discussed ways to strengthen bilateral cooperation in the field of direct investment between the two countries, removing obstacles that may obstruct their mutual cooperation through joint cooperation with officials and the relevant authorities in both countries, and monitoring the execution of the agreements concluded in the various fields of cooperation and implementing them in order to achieve mutual benefits for both countries

KDIPA participates in the annual meeting for Scholarships and Training Officials

Kuwait Direct Investment Promotion Authority (KDIPA) met with a Korean delegation, consisting of small Korean businesses, who was accompanied by […]