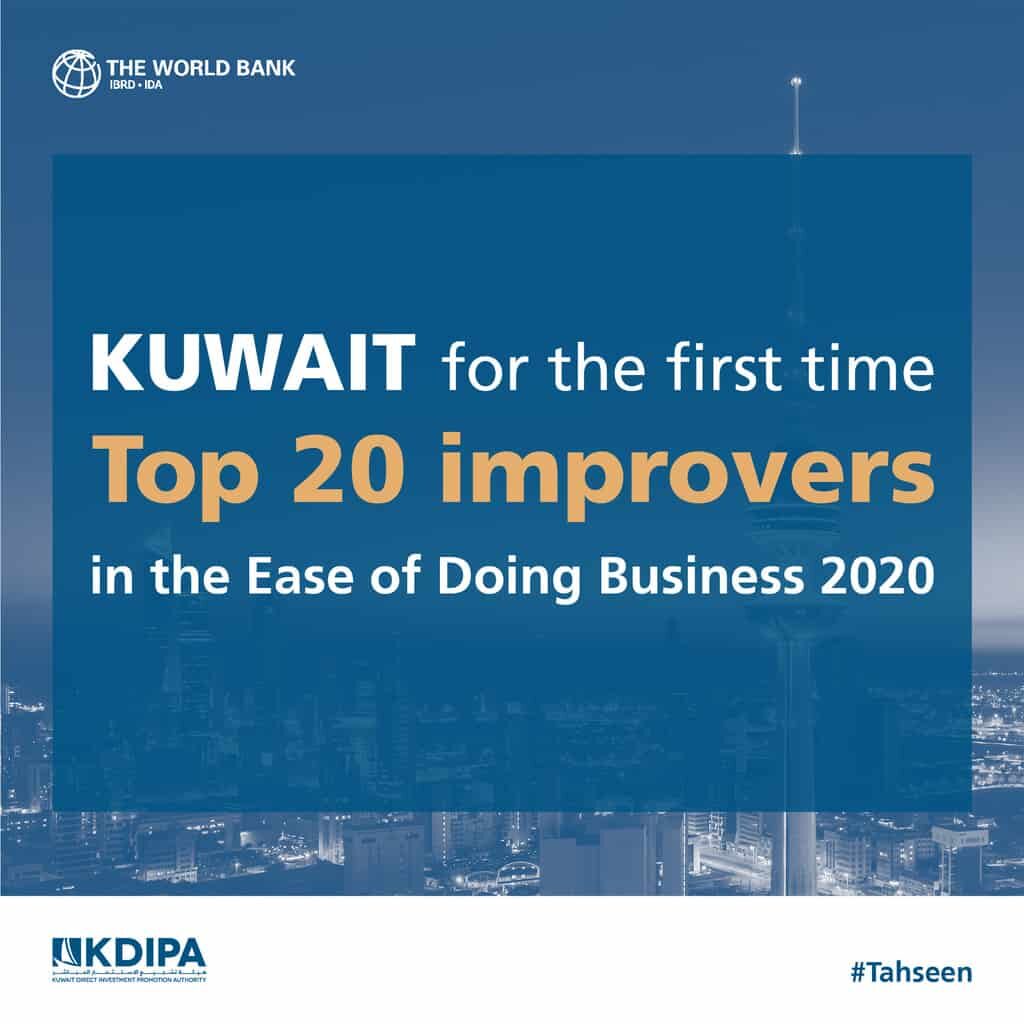 The Doing Business Team at the World Bank Group (WBG) announced on its website today September 26, 2019, that Kuwait joint for the first time the group of top 20 improvers in the Ease of Doing Business Index 2020 out of 190 economies included in the Doing Business 2020 report to be published officially end of coming October 2019. This global index captures ten key components that represent various dimensions of business regulatory environments for domestic enterprises.

The announcement mentioned that Kuwait enhanced its business reforms in accordance with National Vision 2035 and its goals. The announced improvements covered measures undertaken in 6 components as follows:

This improvement in Kuwait position in the Ease of Doing Business Index 2020, will directly and indirectly contribute to make Kuwait investment climate more attractive, and support the attainment of the National Vision 2035 and its developmental goals, which will eventually enhance the expansion of the economic cycle, availing the creation of more real job opportunities to the local work force. It also reflected the dedicated efforts exerted by “the Permanent Committee for Streamlining Business Environment & Enhancing Competitiveness in the State of Kuwait” (PCK), since it was established by a Council of Ministers Decision end of 2013, headed by KDIPA, with membership extended to include 11 competent government entities, in addition to representatives of the private sector, and civil society organizations.

The Permanent Committee for Streamlining Business Environment & Enhancing Competitiveness in the State of Kuwait” (PCK), was initiated with full support by H.H. the Prime Minister to serve as an active platform for coordinating national efforts, documenting reforms,  raising awareness on reforms undertaken, and following up their progress, as well as placing improving business environment and national competitiveness at the top priority of the government work program.

On this occasion, “the Permanent Committee for Streamlining Business Environment & Enhancing Competitiveness in the State of Kuwait” (PCK), conveys the utmost appreciation and esteemed gratitude to  H.H. the Amir Sheikh Sabah Al Ahmad Al Sabah, and to H.H. the Crown Prince, for the  leadership foresight and calls to mobilize national efforts to attain this improvement, that will support fostering Kuwait competitiveness in international indices,  enabling it to assume its role as a leading financial and commercial center, augmented by the  leadership ongoing focus on this issue, in a way that motivated all relevant parties to endorse, with competence and efficiency, their mandated responsibilities to realize this strategic goal.

Kuwait Direct Investment Promotion Authority (KDIPA) received an economic delegation from the Republic of Ireland, at KDIPA’s headquarters on November […]