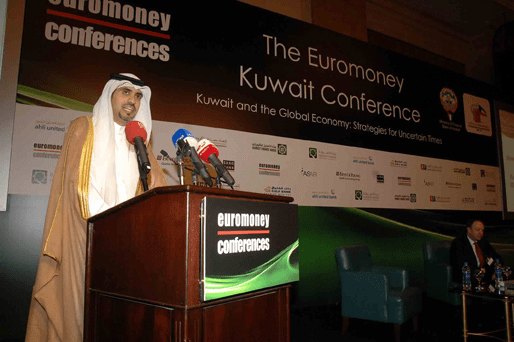 28-Mrs-2012, Kuwait Foreign Investment Bureau participated in the fourth Euromoney Kuwait Conference which was held on 27 March 2012 and co-hosted by the Ministry of Finance, and supported by several renowned sponsors. The conference theme was on Kuwait and the Global Economy: Strategies for Uncertain Times. H.E. Deputy Prime Minister and Minister of Finance, presented the opening address followed by KFIB Chief address, which covered the challenges facing the region in such uncertain circumstances, both external and internal, recent developments undertaken at KFIB to enhance its role in attracting value added FDI, and servicing investors in collaboration with various government entities.

The participants in the conference were around 300 high ranking and senior executives, mainly from the finance, investment, and banking sectors, as well as some government officials. The three panels covered timely topics related to: Stability, Growth and Jobs: The Kuwait & the World Economies; Financial Sector Review: Are Finance & Banking on the road to nowhere? And Investment Strategy in a Low/No Return Environment.