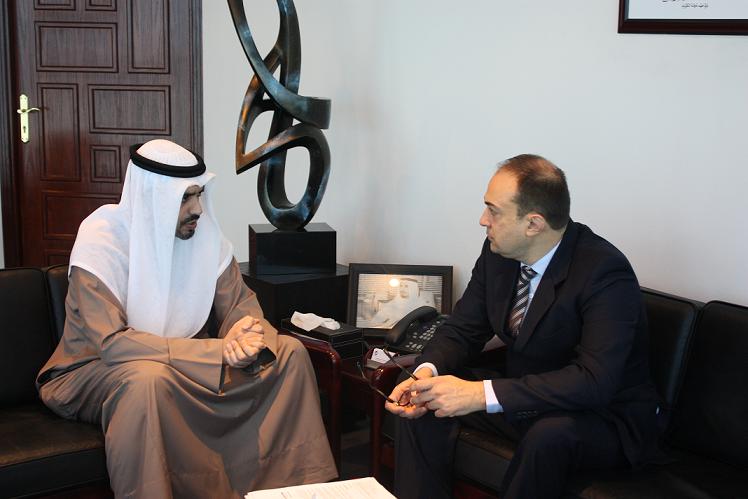 27- March- 2013 , Kuwait Foreign Investment Bureau (KFIB) was visited by Mr. Carlos A. Bronzatto, Head of Permanent Secretariat of the World Association of Investment Promotion Agencies (WAIPA) on March 25, 2013 from 11:00 am till 2:00 pm; this is the first time a WAIPA executive visits KFIB which has been a member of WAIPA since 2006.
KFIB Chief Sheikh Dr. Meshaal Jaber Al Ahmad Al Sabah held a courtesy meeting with Mr. Bronzatto whereby he introduced recent developments in KFIB, reflecting on future plans, and discussed means  to maximize benefit from KFIB membership in WAIPA by knowing various options available. Mr. Bronzatto  further explored  areas of mutual interest upon meeting with KFIB economic consultant, and management; he concluded with an  interactive session with lively discussions held with KFIB staff. The outcome of this visit will help to lay a strong foundation for  articulating areas of the upcoming cooperation.
A KFIB delegation from its Investors Services Centre (ISC) attended WAIPA World Investment Conference 2013 for the first time since KFIB became a member of WAIPA; the delegation came back with a positive perception and a host of great ideas relating to the three conference themes: importance of investment in infrastructure for creating a virtuous cycle, attracting knowledge-based FDI, and effects of business environment rankings on  perceptions and investment decisions, like Ease of Doing Business by the World Bank Group.
WAIPA was established in 1995 in Geneva as a non-government organization, and  has currently a membership of  244 investment promotion agencies (IPAs) representing both national and sub-national entities from 162 countries. WAIPA provides the opportunity for IPAs to network and exchange best practices in investment promotion through organizing conferences, seminars, workshops, road shows, tour studies, surveys, etc. WAIPA also helps to build the human resources capacity of its member agencies through organizing training events alone or within a regional group.
http://www2.waipa.org/cms/Waipa