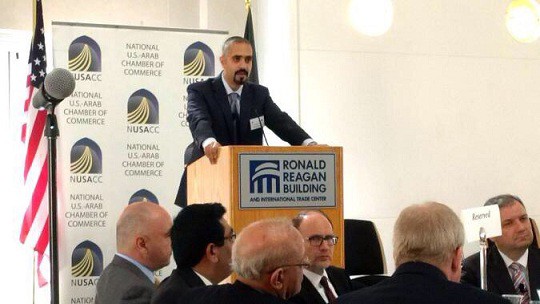 May 28, 2015: Kuwait Direct Investment Promotion Authority (KDIPA) Director General Sheikh Dr. Meshaal Jaber Al Ahmad Al Sabah, and the accompanied delegation of Sheikh Abdullah Al Sabah, Head of Licensing & Investment Registry, and Mr. Khalid Al Zeid, Account Manager, Investors Service Section, attended a roundtable on “Business and Investment Opportunities in Kuwait” held in the Ronald Regan Building & International Trade Center in Washington D.C. on May 12, 2015, as part of their first 2-day official visit to the United States of America (USA), organized by the national U.S – Arab Chamber of Commerce (NUSACC), and the U.S. Embassy in Kuwait, in cooperation with the U.S. Department of Commerce. Mr. David Hamod, President and CEO of NUSACC, presented the opening remarks, indicating the importance of this high level road show. H.E. Douglas Silliman, U.S. Ambassador to the State of Kuwait spoke on the favorable emerging changes in Kuwait’s legal and regulatory framework, indicating that Kuwait is one of the fastest growing markets for the U.S. goods and services in the MENA region. KDIPA Director General provided a presentation to the panelists showcasing Kuwait’s main attributes that identify its unique proposition, recent 30 strategic projects in various sectors under the current second development plan (2015/2016–2019/2020). He explained that Kuwait is interested in attracting FDI as a direct channel for the transfer of technology and know-how, and for fostering innovation and entrepreneurship. He also explained the incentives and exemptions granted under Law 116 of 2013 including foreign ownership up to 100%. The panel discussion was led by Mr. Dao Le, Senior Commercial Officer at the U.S. Embassy in Kuwait, whereby panelists from IBM, GE, KGL Holding, EY, and University of Massachusetts Lowell, shared their story about their business experience in Kuwait. The roundtable was attended by around 200 American companies and other government officials. It is worth mentioning that KDIPA had granted the first investment license to IBM ME, to establish a 100% owned Kuwait IBM.