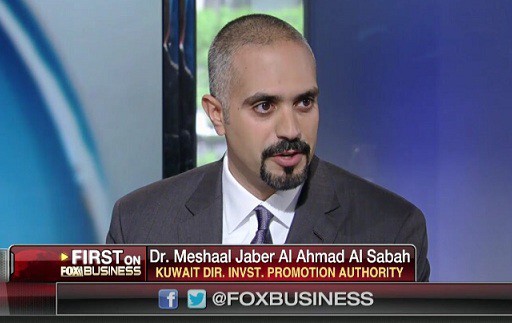 28 May, 2015: Kuwait Direct Investment Promotion Authority (KDIPA) Director General Sheikh Dr. Meshaal Jaber Al Ahmad Al Sabah, and the accompanied delegation of Sheikh Abdullah Al Sabah, Head of Licensing & Investment Registry, and Mr. Khalid Al Zeid, Account Manager, Investors Service Section, had a full day of business meetings and networking in New York on May 11, 2015, as part of their first 2-day official visit to the United States of America (USA). The day stared with a live interview with Anchor of Fox News Opening Bell Maria Bartiromo, whereby Dr. Meshaal showcased some attributes that make Kuwait an attractive investment location, and availability of 30 strategic projects under the current economic development plan in various sectors. The interview was shared with H.E. Douglas Silliman, U.S. Ambassador to the State of Kuwait, who reflected on the strong bilateral relations, and testified to the positive changes that Kuwait is witnessing to attract foreign investors, especially by allowing 100% foreign ownership. The next event was attending a luncheon/roundtable hosted by the Business Council for International Understanding (BCIU), held at The Yale Club joined by senior executives from private sector and members from the academia. In this roundtable, a series of panel discussion ses¬sions were held, whereby KDIPA presented an update on Kuwait’s investment Climate and its long term vision and strategic goals, potential investment opportunities in crucial sectors, and favorable legal and regulatory developments taking place, along with incentives and exemptions granted under the new Law o. 116 of 2013, showcasing KDIPA’s role in providing facilitation and aftercare services. In the late afternoon, another roundtable discussion was hosted by the Wall Street Journal’s Frontier Markets Editor, Mr. Dan Keeler. In this roundtable as well, various issues were tackled including the historical relationship between Kuwait and the U.S., the pioneering role of Kuwait in the 50’s, key attributes of Kuwait as an investment location, and positive changes that occurred since KDIPA had launched its operations as per the objectives and tasks of Law No. 116 of 2013.