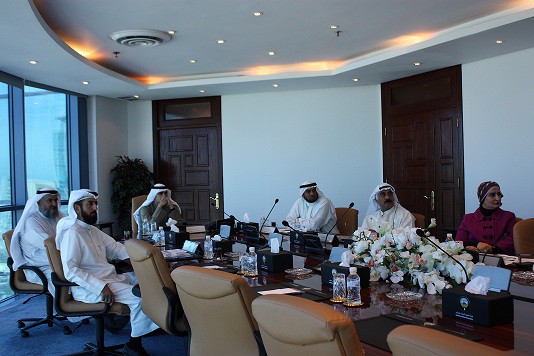 November 11, 2014: The Director General of Kuwait Direct Investment Promotion Authority (KDIPA), Dr. Meshaal Jaber Al Ahmad Al Sabah, headed the meeting of the Permanent Committee for Streamlining Business Environment in Kuwait, convened on Monday November 10, 2014, in KDIPA’s premises. Dr. Meshaal started the meeting by reviewing Kuwait position in the new Ease of Doing Business Report for 2015 (DB2015) issued by the World Bank Group on October 29, 2014. Dr. Meshaal further reiterated the importance of enhancing efforts to attract more direct investments into Kuwait and to diversify sources of revenue. The members of the committee discussed possible suggestions and decisions that relates to enticing reform in doing business in Kuwait and the action roadmap for collecting needed information for preparing  the upcoming DB 2016.  Dr. Meshaal concluded the meeting by thanking the members of the Committee for their continued cooperation and support to achieve the Committee’s mandated tasks.
The Permanent Committee was established by a Council of Ministers Decision No. 1551 issued on December 18, 2013, assigning KDIPA to preside over it,  and with the membership of Ministries of Commerce & Industry, Electricity & Water, and Justice, as well as Kuwait Municipality.