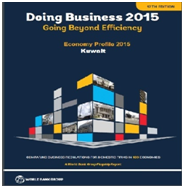 October 30, 2014: Dr. Meshaal Jaber Al Ahmad Al Sabah, Director General of Kuwait Direct Investment Promotion Authority (KDIPA), and Head of Permanent Committee on Streamlining Business Environment in Kuwait (Committee), announced that Kuwait has ranked 86 out of 189 countries in the Ease of Doing Business Report 2015 (DB2015) issued by the World Bank Group, and is the 8th amongst the group of Arab countries that entered in the report, recording a slightly higher Distance to Frontier (DTF) points at 63.11  compared to DTF 63.05 in DB2014. He explained that the efforts carried out by the Committee are still at early stages, but it fairly succeeded in leveraging the shift towards realizing sustained improvement, for which Dr. Meshaal extended his appreciation  to all the government entities that cooperated with the Committee in providing  the needed information and documents. The improvement was a result of extended utilization of electronic applications and e-links in facilitating certain procedures amongst various entities, however the rise in the minimum capital requirements and the fees on commercial licensing has adversely affect Kuwait’s position in DB2015, an issue that will be duly addressed in view of best practices. The DB Team within KDIPA, who works closely with the Committee, had pointed to some obstacles and lack of coordination, as well as understanding of recent procedures as per some new economic laws approved and duplication of tasks. Dr. Meshaal reiterated that the Committee will proceed to effect the needed improvements in the coming days and to engage the contributors of the WBG model questionnaires to portray real picture that would be conducive to support Kuwait competitiveness and enhance inflow of direct investment to attain aspired for economic and social goals. The Committee was formulated in December 18, 2013 and is composed of ministries of Commerce & Industry, Justice, Electricity & Water, and Kuwait Municipality.